Just as we're catching our breath and getting to work on new art for the Miami Kaiju Monster Invasion show, another fantastic group show in Chicago looms near.

Tura started exotic dancing at the age of 13. She became a burlesque sensation earning the title Miss Japan Beautiful. From there her talents lead her to guest appearances on many top television shows of the 60s including Hawaiian Eye, Man from U.N.C.L.E. and Burkes Law. Movie roles followed in Our Man Flint, Irma la Douce and The Astro Zombies, but her greatest cinematic superstar achievement was as the baddest badass Varla, the leader of 3 thrill seeking strippers in Russ Meyer's legendary masterpiece,"Faster Pussycat! Kill! Kill!" 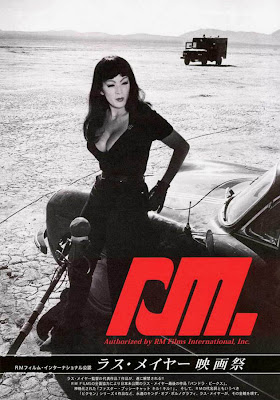 The show will be at the Tattoo Factory Gallery here in Tura's home town, Chicago. The opening will be Thursday, October 30th from 7pm to 11pm. Gallery owner Paul Collurafici (and owner of the adjacent Tattoo Factory) is kindly donating the space and will not be taking a commission, so all profits earned hosting the event will go to Apna Ghar, a domestic violence shelter serving Asian women and children.

Plus! This just in! The poster for the Music Box screening of "Faster Pussycat! Kill! Kill!" by local heartthrob Mitch O'Connell. 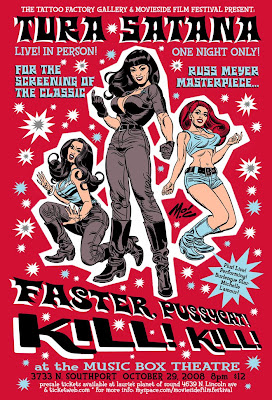 My thanks to Mitch for the invitation to show! Below is a teaser, the back cover of the Estrus Supersnazz record-plus-comic set I drew back in 1995. I'm doing a few brand new pieces honoring Tura. I hope you'll all come out for the opening——Miss Tura Satana is scheduled to attend. This may be a once in a lifetime opportunity to meet a legend——don't miss this one! 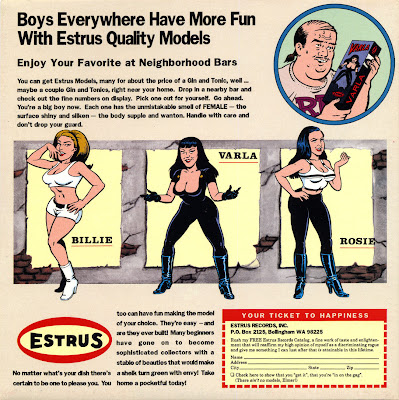 When is the gallery show!?

The opening is Thursday, October 30th from 7pm to 11pm. Hope to see you there, Gene!

I will make it down if it all possible!