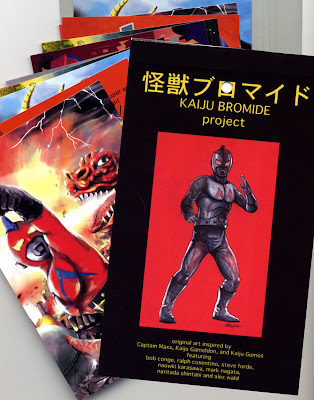 The Kaiju Boom (roughly 1966—1975) penetrated every level of popular media in Japan; film and TV were ground zero but the shockwaves spread to include sofubi, games, puzzles, records, clothing and more. The demand for pure images was nowhere better expressed than in the multitude of collectable cards known in Japan as "bromides."

An emulsion of silver bromide makes possible the printing of photographic images. In Japan, the loan word "bromide" (ブロマイド) had come to signify a vast array of pictorial reproductions, regardless of whether bromide paper was used. Since the early 1900s bromides were distributed to idolize celebrities— geisha and sports stars, singers, actors and actresses. In the latter half of the 20th century, the kaiju became the new celebrity of the post-Atomic Age.

It was Yo Miyamoto who suggested to Kaiju and Ultraman super-collector Mark Nagata "an awesome idea" —— to put together a set of Kaiju Bromide cards to be included with a release of a MaxToy Battle Pack sofubi set for WonderFest 2008 in Japan. The concept would have Mark's Captain Maxx, Eyezon and Alien Xam mix it up with Target Earth's kaiju Gumos and Gameldon.

Mark put out the call for entries to a select cadre of kaiju creators: Bob Conge, Ralph Cosentino, Steve Forde, Nawoki Karasawa, Naritada Shintani and myself. I'm honored to be a part of this crew. There are 15 cards, 11 originals and 4 doubles. Mark's own contributions include spot on, period-authentic "zukan" (cutaway anatomies) of the Target Earth kaiju. 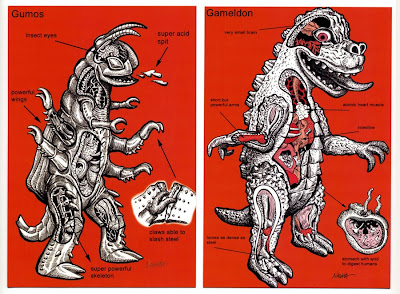 Courtesy of Target Earth's Miyamoto-san, here's what little we know about these new and terrifying kaiju:

GUMOS — Capture animals and humans with his six arms and eat them from the heads.
Tear up irons easily with his claws.
Spit out green poison fluid.
GAMELDON — Eat humans.
Very brutal.
Has very small brain.

My entry, "Golden Gate Splashdown," is set in Mark's home base of San Francisco and shows Captain Maxx putting the hurt on Alien Xam while big Eyezon wades in for a stare fest. And damn--why didn't I do another card with the Target Earth kaiju as well? Well, time was of the essence to get this one in by the deadline. Maybe I'll get a chance to work with these characters again. 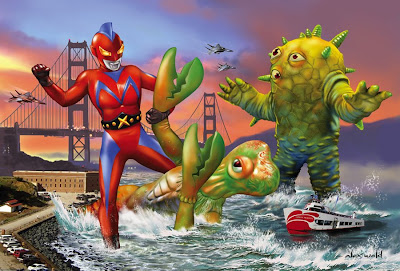 But don't expect me to give them all up here! I urge you to mouse over to the Max Toy Company's store and order your set now!
Posted by aleX wald at 1:28 PM

GOOD GAWD these are awesome! This set is a must-have!!

Thanks, Brad! Thanks, Mike! You guys are great!

I have this set and it's incredible! Alex's work above is a personal favorite of mine... but what a talented line-up!
Definitely pick up a set if you can...before they sell out!