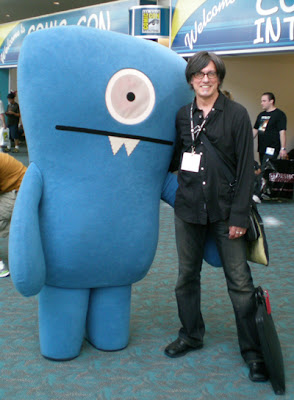 According to the official Uglydolls site, "Wedgehead understands you." So how come he wouldn't stop when I told him not to grab my butt? Thanks to Charlie for the photo.
Posted by aleX wald at 9:43 AM 2 comments:

This morning's blog auto-searchbot brings a pickup from a local Pioneer Press article by Michael Bonesteel that features Charlie and myself. The comics industry equivalent of Daily Variety, Newsarama has an excerpt from the Pioneer Press item and displays my Guitar Wolf piece. Thanks, Newsarama.
Posted by aleX wald at 7:09 AM No comments:

This year's San Diego Comic-Con was my first in a long time--way too long! Everything was amplified beyond previous levels. More artists, more fans, more mileage within the convention center, than I've ever experienced before. It took almost as much time to navigate the convention center as the entire flight from Chicago to San Diego!

I was HQd at the Rolling Thunder booth through the extraordinary courtesy of Denise and Dave Dorman, for the debut of The Devil's Candy Store. Computer Art Pioneer Charlie Athanas, also a principal in TDCS and tireless Entrepreneur Esquire, helms the bridge and stays the course. "If anyone asks you..." "Concept Art!" we exclaim. We're all about Concept Art and we will rock your world. Me, I get to do Art Direction. I've known and worked with Charlie, Dave Dorman and Tom Baxa since back in the First days--and they still put up with me! I was thrilled to meet Devil-Folk Chris Moeller, John Van Fleet, Scott Hampton, Craig Elliott and Durwin Talon. 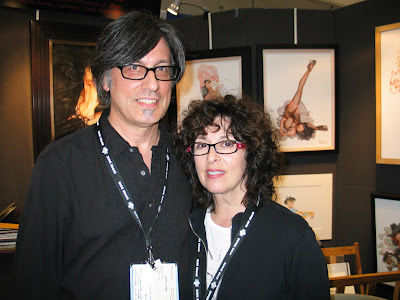 Here's the always gracious Olivia deBerardinis, our generation's Vargas. Once upon a time, I was art director at First Comics and we produced Olivia's earliest calendars. The pinup she painted of a tattooed yakuza maid for the Lone Wolf and Cub Collected Edition is still one of my favorites. 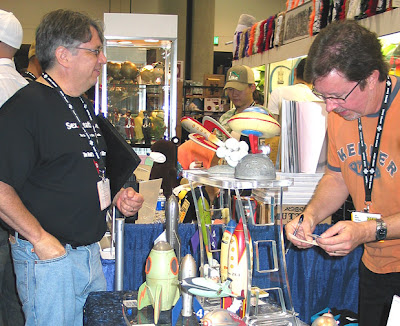 Charlie shops for Cool Rockets. "How much for the whole flotilla?" 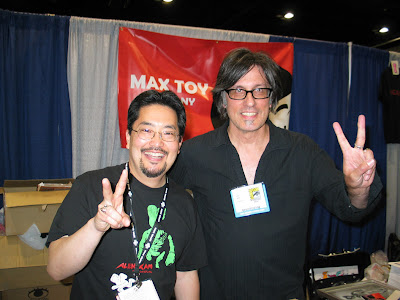 Mark Nagata, kaiju comrade and fellow illustrator, at his booth, Max Toy Company. Mark turns out to be real person after years knowing him only as a disembodied voice on the phone! Mark introduced me to his lovely wife Anna, their son Max (who looks exactly like the company logo!), the legendary Mark Suggs, Justin Kovalsky, Mr. Ikeda Kiyoka and the whole Gargamel Gang. Thanks, Mark!

I had a special reunion with Nexus Main Man, Steve Rude, who I hadn't seen since Mezz was a pup. I'll try to get a photo of this historic congress; if not, look for it in the upcoming Nexus #100.

Congratulations to Peter and Ania on their engagement!

Extra special thanks to Kathy Tanaka for an astounding auto adventure and getting me to the airport alive!
Posted by aleX wald at 9:23 AM 7 comments: