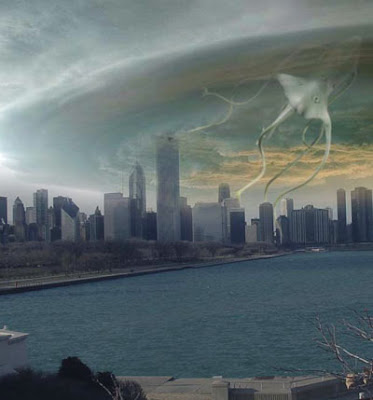 Astromonster Dogora appears over the Chicago skyline. This extraterrestrial medusa is known to descend from the stratosphere and extrude its tentacles to Earth's surface. It will ingest any and all carbon polymorph materials. Lock up your diamonds!

Study this exotic creature at Bill's Kitchen.
Posted by aleX wald at 3:42 AM No comments:

Happiness is a Pink Tentacle

There are so many wonderful posts on Pink Tentacle that parallel our own special interests! The highest compliment I can pay: I wish I had posted them myself. In recent days there have been excellent entries on Mermaid Mummies

and the discovery of a Kappa-related antiquity.

The Studio Astromonster store, Emporio Astromonster, opened on July 25 under the aegis of Charlie Athanas' newest venture, the Burning City Webstore. I'm honored to be the first guest artist represented in the store; other notables to be joining soon. In addition to Charlie's own work featuring Ralph the Punk and theater posters for Clive Barker and William Gibson stage adaptations, my initial three designs are available as well. Choose from a variety of apparel—tee shirts, jerseys and such, babydolls, camisoles and spaghetti tees for the ladies. I'm already working away at new pieces for future releases. Featured now are "Astrobrain," "Super Giant," and the "Bat Lady," about whom, more will be posted soon. 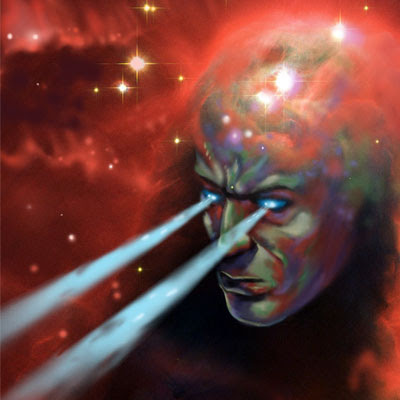 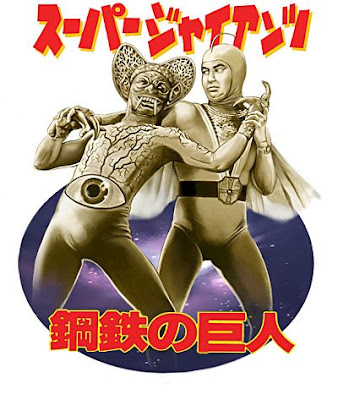 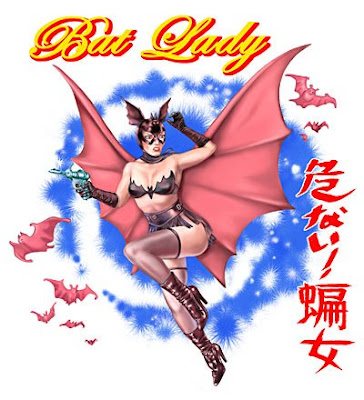 Proceeds from the sales of Astromonster merchandise go to support the Foundation for Interspecies Affairs, United Planets Federation.
Posted by aleX wald at 4:16 PM 3 comments:

Dave Crider, head head-hunter at Estrus Records is having a big blowout sale on select 7 inch titles. These are 45 rpm vinyl records, folks, the kind they don’t hardly make no more. The illustration and packaging for Estrus releases are always a treat for the eye. Many are by the often imitated, never duplicated Mr. Art Chantry, his signature look essentially defining the Estrus Esthetique. There are however, a select few that were designed and executed by yours truly—absolutely the most fun I’ve ever had on any assignment, anywhere, anytime. I've loaded a few of the images below. Stock up on now on the last remaining copies of Flaming Sideburns “Jaguar Girls,” Galaxy Trio, both “Cocktails with Gravity Girl” and “Sheriff Boy-Ar-Dee,” Sugar Shack’s “Don’t Mean Shit to Me,” Supersnazz “Gotta Go Now” with cool 8 page comic insert, The Mants “I Smell Woman,” Switch Trout’s “Psychodestruct,” and the piece de resistance, Southern Culture on the Skids’ “Santo Swings,” a super-deluxe double 7” with full color insert cards of the band, luchadores El Santo, Blue Demon and Mil Mascaras, and six sinister Mexican Movie Monsters. I’ve seen these go for $35 to $50 on eBay! Order now from Estrus at a much better price. 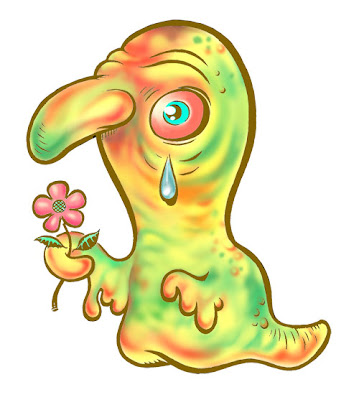 Here's the last Mojizu character I posted before knuckling down to WizardWorld preparations. Newly colored like an accident in the jams and jellies aisle and sporting a romantic bouquet, the Shmendrik hopes for the best but expects the worst; a homely but practical fellow. I had an older inked and Pantoned version of this creature sitting in my files for years. The original sketch version was part of the fallout from my long ago mini-comic “Muddy Buddy,” fondly remembered by nobody except Raf. Kaijumaniacs and otaku will note a certain resemblance to Olde Sludgie himself, Hedorah. 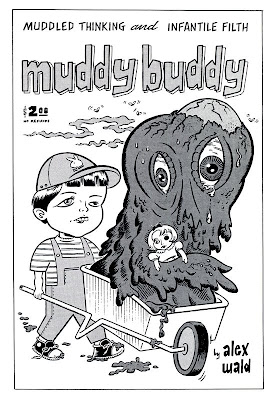 But going even further back, here’s a look at the inspiration for the Muddy Buddy cover, a tiny coloring book I picked up on Wentworth Street one New Years day in February while shopping for Moon Cakes. 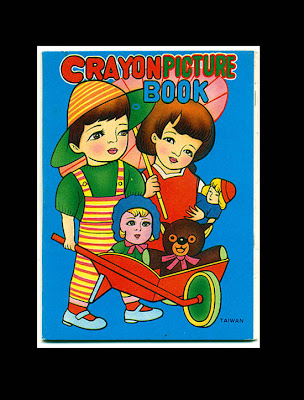 Got my Moji working

I discovered Mojizu by way of an ad on the Drawn blog. Mojizu declares itself to be "a contemporary character design community," which, I suppose, is a fancy way of saying "crazy critter farm for artists." I couldn't find any explanation of how they came up with the name "mojizu" on their "About" page though my guess would be they had in mind the Japanese word "moji" which means character (actually in the sense of an alphabetical character; a letter) plus "zu" meaning a drawing, illustration or diagram, thus equaling "character drawing." Is it possible the powers that be at Mojizu concocted a Japanese neologism or is my reverse translation just a wishful propinquity?

At any rate this seemed like an ideal networking op as well as a place to showcase the multitude of loony lifeforms that inhabit Chez Astromonster. I'm registered as "ultralex," which is my character name for — me. I've posted one new critter, sorry, "moji," in each of the last three days. I have a couple more waiting in the wings that should be up soon. I know Charlie wants me to get back to more serious work too so I'll be updating that soon on this space.

Go check out Mojizu for hundreds of characters from designers and artists all over the world. See below for a peek at my new characters. 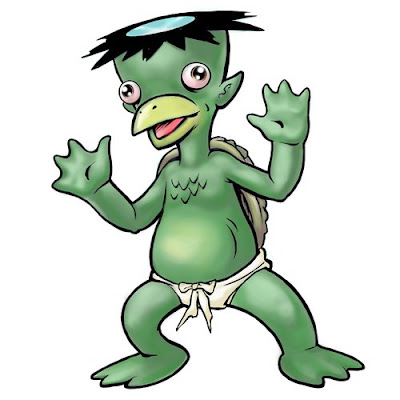 This is a kappa, a cute one at that — kappa these days are invariably cute. For the lowdown on the dark nature and possible origins of the kappa, go to the entry on Mark Schumacher's excellent Japanese Buddhist Statuary site. 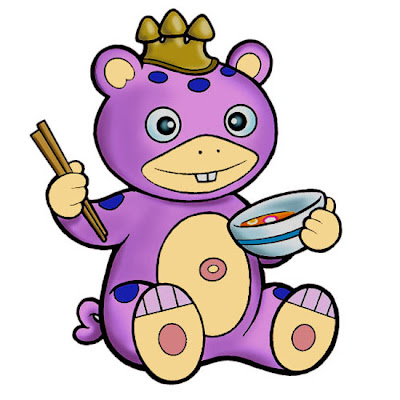 Booska! It's surprising how little official Booska info there is on the net. Until I find something better this Wikipedia item will have to do. By the way, though Booska is a "kaiju," according to the kanji he's not a "mysterious beast," but rather a "delightful beast." Scholars, take note. 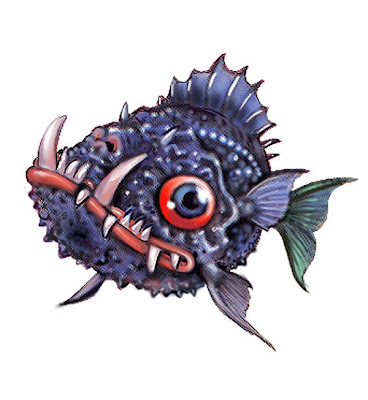 This critter, newly named "IcthyIck," was excerpted from a cover I did for the dear departed Bimbobs', "You Snooze, You Lose" CD.
Posted by aleX wald at 8:51 AM 2 comments:

Tales of Fireworks and Rain

Fireworks displays always seem to get chased away
by the steamy early July rain.
But does the sudden influx of gunpowder and nitrites
into the atmosphere precipitate the rain?

Or does the Great Water-Calling Dragon of the Sky--

try to vanquish the Great Fire-Spitting Toad of the Earth?

Of course I love the smell of gunpowder in the evening.
It makes us feel...different. Don't tell me you don't inhale.