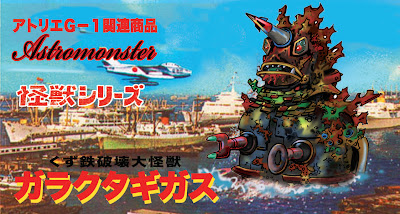 I've been blown away by the enthusiastic reception for the announcement of my first toy design, a collaboration with premier kaiju sculptor Mr. Okuda Shigeki of Atelier G-1. Kirkland Jue of Toybot Studios did a fine interview with me about what makes Garakutagigas tick; it is reprinted here with his kind permission.
——————————————————————————————————————————————————————
One of the toys revealed at Super Festival 56 this weekend that just blew me away is the GARAKUTAGIGAS which is a collaboration between Chicago Artist Alex Wald and Atelier G-1. I first met Alex a couple of years ago at Mark Nagata's Toy Karma 2 Custom Show at Rotofugi. Super nice guy. Obviously super talented as well. We sat down for a virtual interview on his latest venture:
pictures via:   Sofubi Blog Kadomiumtank    Garamania
TBS: You mentioned Garakutagigas is a Junk Giant, a golem of garbage and industrial waste. What is his relationship to Garamon if any? He looks like a junkyard version of mecha Garamon.
AW: There is a core element of Tilsonite in the composition of Garakutagigas--the element that composed the Garadama meteor that brought the original Garamon to Earth. This rare substance has a number of strange properties; it may house a living intelligence that can exert a creative or organizing force over its surroundings. So when a metal reclamation yard was built over an ancient Tilsonite impact crater... I have enough notes to make a fairly decent story. I started to rough it out, thinking it would be cool to have a mini-comic with the toy but soon realized I didn't have enough time to get one done for the first release. It will happen eventually... 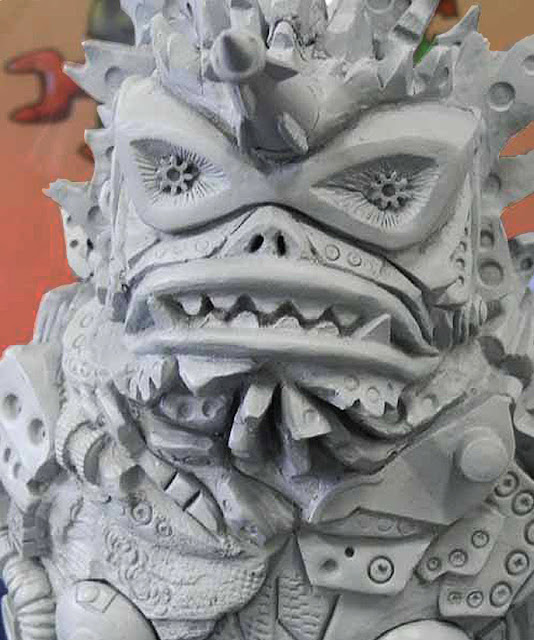 TBS: Is there any social commentary related to your design?

AW: Actually I'm very interested in the relationship between what we call art and what we call junk--dialectically opposite but really it's very much a matter of perspective. The lines are not at all fixed--what one culture considers junk, another calls art. Our society produces and venerates much that we condemn as "junk culture," we may know it's unworthy, mediocre or substandard but we love it just the same. And then there's the issues of salvaging the colossal waste our society produces as an unavoidable byproduct to progress. These concepts came flooding in to me as I drew the earliest pieces that evolved into Garakutagigas. I've been to a few junk yards, there's a pervasive atmosphere of doom to an auto graveyard. And I love the idea that all this waste, this useless garbage, is carefully guarded by men with guns and ferocious dogs. 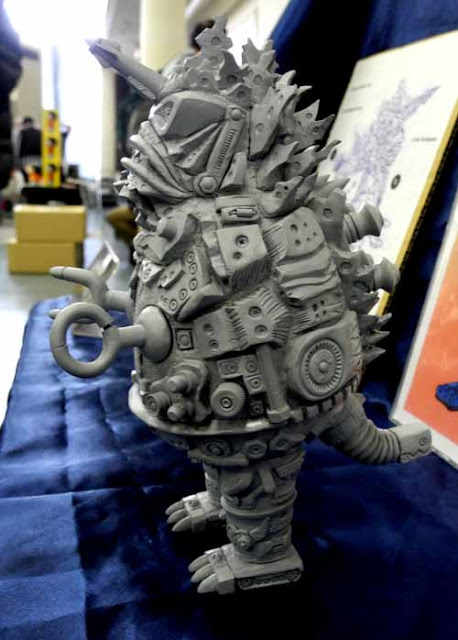 TBS: Is he related to Hedorah or Smogun in any way?
AW: Yes, I think that (creator of Hedorah) Mr. Banno was prescient in some way; he was inspired by Rachel Carson's landmark book on ecology "Silent Spring." He conceived the pollution monster Hedorah in the early '70s when great debates raged about pollution and ecology. The following years have seen Hedorah resonate even more strongly in society. The collector's world we're familiar with is a tiny niche society with a million fragments--by now there must be nearly as many renditions of Hedorah as there have been of Godzilla. I don't know the statistics...it might be interesting for someone to take a census...
TBS: Was he shiny and brand new like Mecha Godzilla at one point and then fell into disrepair?
AW: Oh no, "baby, he was born this way!" 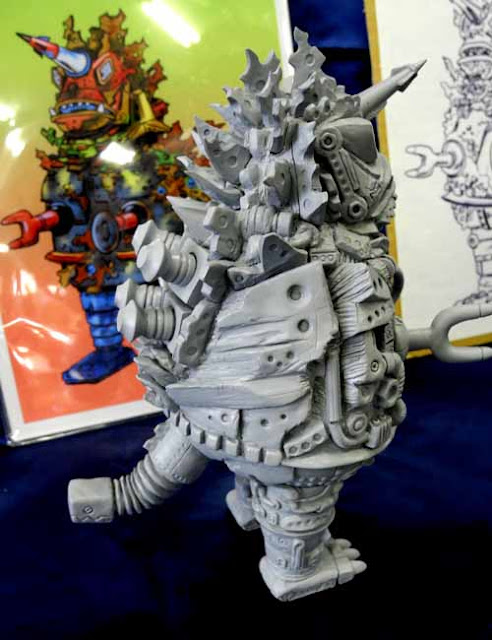 TBS: If you could pick another one of your illustrations to be made into a vinyl toy, which would it be?
AW: Mr. Okuda and I have discussed the possibility of another design. I'll decline from identifying it at the present out of deference to him. But I have a number of other designs on my astromonster blog and in my Flickr sets. I'd like to get back to sculpting some originals as well---I haven't made sculpture in a very long time....
TBS: Would you like to design more toys in the future?
AW: Oh yeah! That this is happening at all is totally a dream come true---I still can't believe it. In addition to my other drawings and images, I have many designs for specific toys. My sketchbooks have been full of them for years!
TBS: wow..! Thank You Alex... Looking forward to this toy. We can hardly wait. The response has been tremendous. 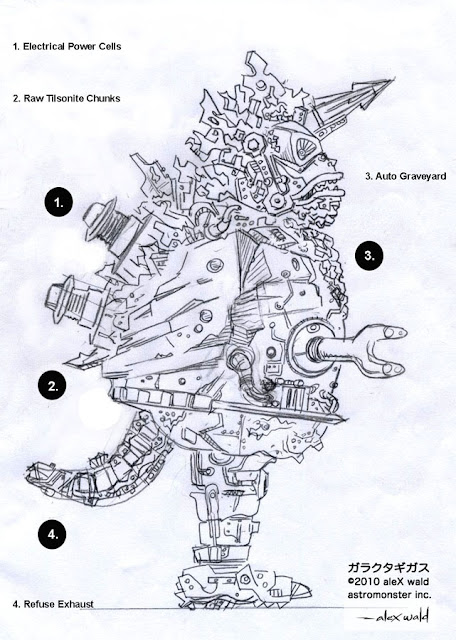 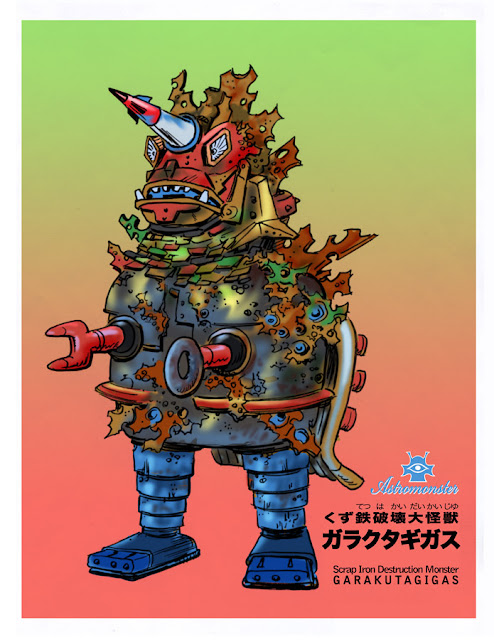 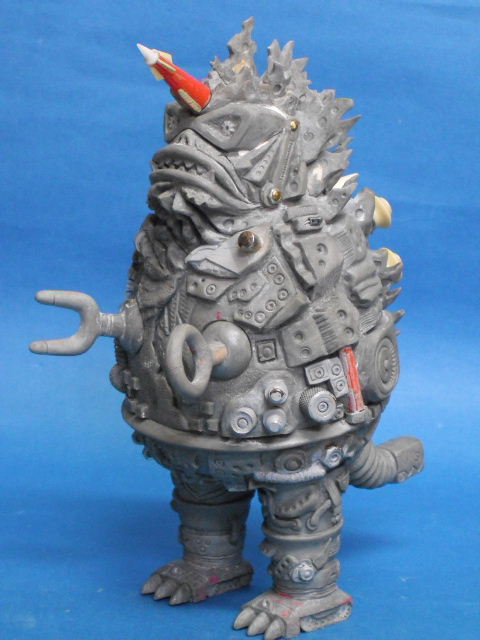 Alex would like to thank Mark Nagata who helped put the collaboration with Atelier G-1 in place. It also couldn't have happened without the aid of the omnipotent Yo Miyamoto..! 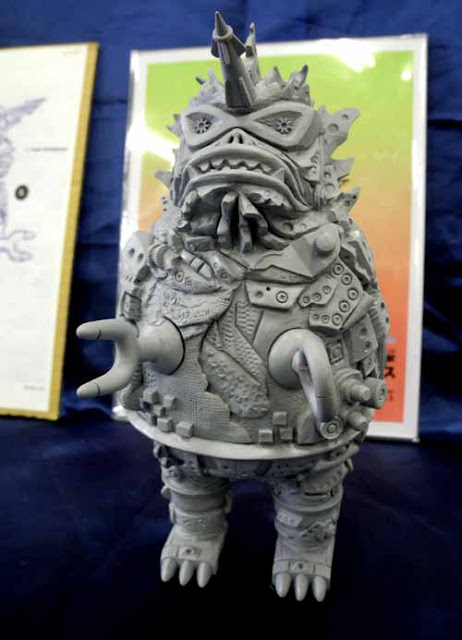